The SWAGNet field campaign, part funded by the SIOS Access Programme, was carried out in April and May 2019, based in Ny-Ålesund at Norwegian Polar Institute Sverdrup. The objective was to install and expand a wireless network of scientific sensors in the vicinity of the glacier Kongsvegen. Previous work had established an “Internet of Things (IoT)” gateway at the glacier pass, from where data could be sent over the air to the cellular network in Longyearbyen. Several study sites on Kongsvegen were instrumented with wireless antennas for sending data up to to the glacier pass and from there to a cloud server, where data could be viewed in real time. 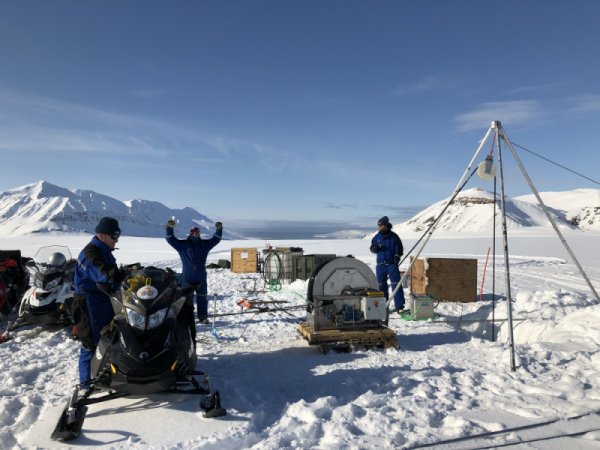 The SWAGNet field efforts included installation of a snow measurement station on Kongsvegen, where snow depth and temperature are being recorded and transmitted through the wireless network. Two GPS stations were installed on Kongsvegen to monitor the motion of the glacier in advance of an anticipated surge. A new borehole was drilled on Kongsvegen using a hot-water drilling rig, with sensors installed in the borehole to measure the ice temperature. An existing borehole, drilled in 2018, was integrated with the wireless sensor network to send data on ice temperature and water pressure at the base of the glacier. Finally, the wireless gateway at the glacier pass, located at the old Telenor station, was upgraded with a new battery bank. A vertical-axis wind turbine was installed on the roof of
the station to power the batteries in the dark season when the solar panels are not receiving sunlight.

Although there are still some bugs to be ironed out with the wireless networking, a stable foundation has been laid upon which wireless data transmission can be expanded to include additional field measurements in this region.