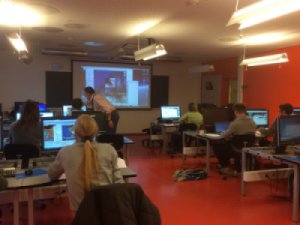 The SIOS workshop on Copernicus data for Ice and Snow took place over the course of three days (11-13 September 2017) at the University Centre in Svalbard in Longyearbyen. SIOS’s remote sensing service, led by Dr Anna Maria Trofaier, was in charge of tailoring a training session that was aimed at providing researchers with the basic skills they need to discover and process Copernicus satellite data, using only open source software environments. The focus was on multispectral satellite data from the Copernicus satellites Sentinel-2 and -3.

Dr Gareth Rees from the Scott Polar Research Institute at the University of Cambridge was invited as the guest speaker. He delivered a compelling series of talks on the first day of the workshop, providing much food for thought and encouraging researchers to explore possible applications of satellite data to their own research field.

The subsequent two days were spent in the computer lab processing data. Students and researchers were introduced to new software environments and their key benefits, giving them the opportunity to learn how to choose which software to adopt. Sentinel-2 imagery of the Longyearbyen area was manipulated and classification algorithms were discussed for raster formats. In the final session, ice floe size distributions in the Fram Strait were analysed using Sentinel-3 imagery.

This was SIOS’s first training workshop, and a pilot initiative.

As a pilot, the workshop provides us with the useful grounding needed to develop the SIOS training programme, allowing us to make further improvements to the experience of learning how to process and apply satellite data. We foresee an increased usage of satellite data to monitor the changing environment in Svalbard, and further integration in research studies as part of the observing system.

The pilot workshop was well received, and we would like to take the opportunity to thank Dr Gareth Rees for coming all this way to Svalbard to kick-off the SIOS training sessions.