A truly interdisciplinary approach in action

by Andreas Alexander, Department of Geosciences, University of Oslo 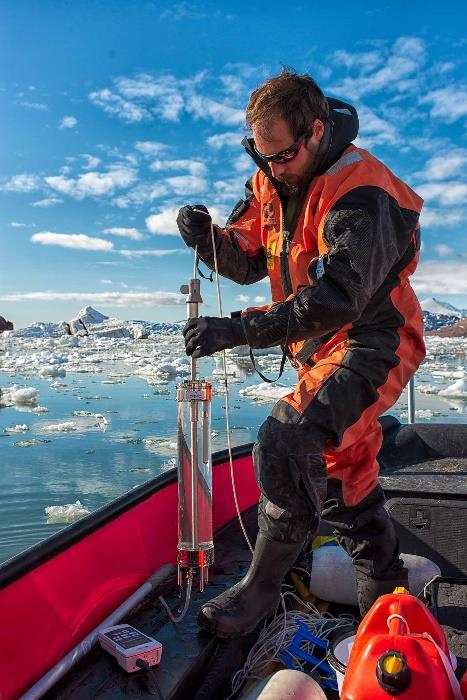 Setevatnet is a glacier damned lake near Ny-Ålesund, which forms annually with the onset of the melt season. Following a several weeks long filling period, the lake rapidly drains through the Kongsvegen glacier and out into the fjord in a so called glacier lake outburst flood (GLOF). The InnovateGLOF project had the goal to study the 2021 drainage event and learn more about the lake formation and its freshwater ecosystem, the mechanisms leading to the sudden drainage, the impact on the glacier and the effect this freshwater pulse has on the fjord.
Funded by, among others, the SIOS Access Programme, an Arctic Field Grant and an EU INTERACT Transnational Access grant, a field team of four persons from the University of Oslo and the University of Silesia arrived in Longyearbyen on the 31st of May for initial safety training at UNIS. After three days packed full of safety training, organisation and preparation, the team transferred to Ny-Ålesund to start the main operations. Work was thereby split up between three main areas: The fjord, the glacier and the lake.

A mooring, to measure sea floor bottom currents, was installed close to the main meltwater outlet between Kongsvegen and Kronebreen in early June. The mooring stayed in position until early July, surviving plenty of heavy calving events and ice moving in and out of the area. Eventually the mooring did, however, disappear and could to-date not be recovered.
Three time-lapse cameras (time interval 1 min) on the middle moraine of Kongsvegen were used to monitor calving activity and meltwater outflow at the glacier front from mid-June to early August.
Four fjord water sampling stations were established close to the meltwater outlets in front of Kongsvegen and Kronebreen. Sampling at the surface, 5 m, 10 m and 20 m depth took place sub-weekly to daily from early June to early August. The 172 collected water samples from these stations will be analysed for nutrients and DNA. Additional collected data included temperature and conductivity, as well as sporadic CTD profiles and water samples for mercury analysis. Between 22nd and 26th of July multi beam bathymetry mapping was conducted in front of Kongsvegen and Kronebreen utilising R/V Clione.

Subglacial meltwater pathways on the southern side of Kongsvegen were mapped by speleological investigations and subglacial ice and water sampled for nutrient and isotope analysis. These measurements were additionally supplemented by sensing drifter investigations. Surface meltwater pathways were mapped with drones and sensing drifters and supplemented by manual measurements of hydraulic geometry, water velocity and discharge.
An automatic weather station was installed in vicinity of Setevatnet and a broadband seismometer at mass balance stake 1. Terrestrial photogrammetry, sub-weekly terrestrial laser-scanning and drone flights were conducted to monitor changes of ice geometry in vicinity of the lake. This data was further supplemented with a ground penetrating radar survey of the floating ice around Setevatnet. Three GPS stations were installed on the floating ice to measure its uplift and maintained two to three times a week.

In addition to the wealth of field data collected during the project, a large quantity of remote sensing data was also acquired and will be used in the further analysis of the project. This includes radar data (Sentinel-1), optical data (Sentinel-2, Landsat-8, Pleiades, Planet) and laser altimetry (IceSat-2).

Collecting all this data of course came with many challenges, starting with the 16-20 km boat ride one-way, followed by a hike of 6 km one-way, roped up over a snow-covered glacier to get to the lake. The glacier surface changed rapidly, with new crevasses opening up on a daily basis, meltwater pooling for weeks and small streams developing into impassable obstacles. Technology that didn’t work, new weapon regulations, long days in the field that regularly ended with past-midnight boat rides home, sometimes with challenging weather and ice conditions, followed by the unpleasant surprise of others eating our late-dinner rations (who would still be in the field that late?). Surely a fieldwork to shape endurance.
The biggest challenge, however, was an uncooperative lake. After almost two months in the field, the majority of the team left on the 22nd of July, while the lake was still growing, thereby surpassing expected level and area by far. Some of the instruments were fully submerged by the rising lake levels, while others had to be left behind to capture the actual lake drainage, posing the big question of recovery. This was, however, solved using a tourist expedition vessel and the NPI/ UiO glaciology autumn mass balance survey in late August. Once back in the office in autumn, the data from the recovered instruments revealed the irony of the project: The lake started to drain 3.5 hours after the majority of the team left on the 22nd of July.
Yet, thanks to the fantastic collaboration possibilities that Ny-Ålesund has to offer and the partners from the 11 institutes involved in the project, almost all data could be collected as originally planned, despite the challenges faced along the way. Currently the last samples are on their way to be analysed and a large amount of data (more than 350 GB) is being sorted through in order to be processed and published in the coming months.

This work would of course not have been possible without all the help and input from various persons at NPI, Kingsbay, SIOS, UNIS, UiO, TalTech and all the others that we met in Ny-Ålesund, as well as all the agencies funding our work. A big thanks to all of them.
Additional information about the collected data can be found on the RiS database: https://researchinsvalbard.no/project/9647
For further pictures see Instagram @icyscience 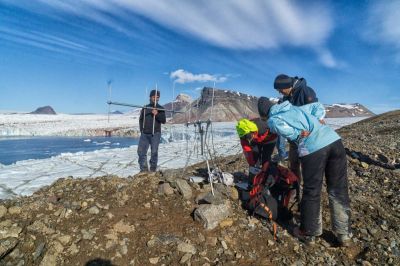 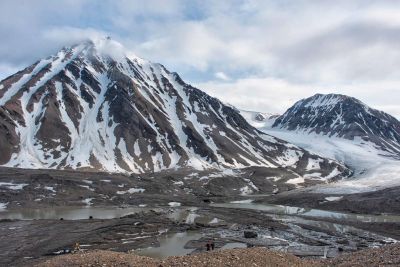 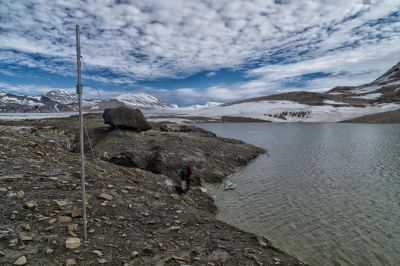 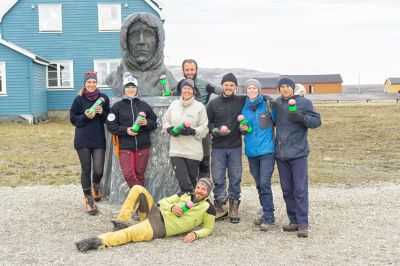 Caption photo 2-5 (left to right): 2 - Installation of radio antennas on the middle moraine of Kongsvegen to locate sensing drifters in the fjord, 3 - Setevatnet in mid-July, 4 - Freshwater sampling at Setevatnet close to a pole with differential GPS and pressure loggers, 5 - The field team in July with sensing drifters specially developed for this project. All photos by Andreas Alexander.